Why I Am Not On the Anti-Obama Bandwagon 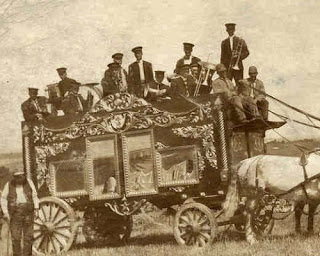 There's hardly a day that goes by that I don't get an e-mail forward from someone bashing the President.

Some of them would say they are "bashing Obama, not the Presidency."

They have a right to do this. In fact, I agree often with these e-mail senders on the issues they have with the President. I am pro-life. I am against government control of everything. I believe in reducing taxes. I believe in cutting government spending. And so forth.

Usually, posts about the President go beyond the issues. They disagree with his decision making, they impugn his character, they mock his politics.

Those are the things that keep me off the "Anti-Obama Bandwagon."

We are coming up on Memorial Day and we will remember the literal sacrifices of life made by men and women since 1775 to provide freedom in our nation, to defend our liberty, and to create our Constitution and government. These soldiers died in defense of our republic and our laws, our interests and our way of life.

For whatever anyone may think, President Obama is part of the reason these men and women fought and died. He was duly elected - freely elected. The ballot box is still alive and well in the U.S. There was no coup, there were no riots, there was no assasination, there were no back room deals. The President won his election hands down, fair and square.

Isn't this what we remember on Memorial Day?

In my opinion, there is little to be gained by attacking Mr. Obama. (I have posted several times in this blog that he needs our prayers more than anything.)

Another reason I don't get on the bandwagon is the "he's not my president" crowd. It's interesting to me how this crowd has changed in ten years. I remember after President Bush defeated Al Gore in 1980: there were liberals all over the country with "Not My President" on the back of their Volvos. This is the mentality that drove the very successful grassroots movement of moveon.org

In fact, he is my president. He is our president. In many ways, I don't like it. Every day tax dollars are sent overseas to provide abortions for women in developing countries. Every day, more and more people are entrapped in government sponsored programs and its subsequent drainage of personal responsibility and drive. In spite of his campaign promises to provide openness and honesty in government (in contrast to President Bush), he still has closed door proceedings to bring about, among other things, the "health care reform bill."

None of that reduces the fact that Mr. Obama is the president of all of us.

There is little to be gained in wasting words and energy attacking him personally.

To oppose the President, we do another thing that Memorial Day stands for: We participate in our government. We vote. We write letters. We make speeches. We run for office. We publish our opinions. We hold meetings.

These freedoms are as essential as supporting the President as president. It's all part of being America, being American.