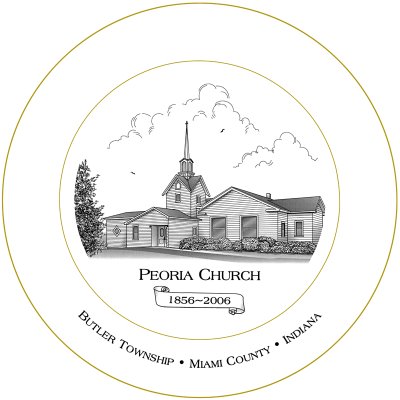 This fall, the congregation I serve as pastor will be 150 years old. It's a momentous occasion for our little fellowship.

Founded in the fall of 1856 by a pioneer family, the Church has changed a lot over the years. The founding family, the Hahns, built a log cabin-style building on their land for worship, because there were no other Churches in the area of Peoria, Indiana. Preachers of several different denominations and styles have been there, including Miami Indian preachers.

It wasn't until the 1910's that they finally settled on a small Methodist denomination. This group became part of the Methodist Episcopal Church in 1939 and the United Methodist Church in 1968. The Church became an independent community Church again in 1997.

The building was remodeled in 1914 with stained glass windows added among other things. In 1962, the federal government began the Mississinewa Reservoir project. The 60-ton structure was dragged across a corn field to it's present site, about 1/4 mi. from the original. New pews, pulpit and communion rail were added, but the basic Church looked very much the same. In 1978, a steeple was put on. In 2005, a nursery and upstair restroom were added.

More important than the building is the people of the congregation. It is a unique and amazing group. Some families have ties to the original founding congregation. Others are newer but feel right at home. There are some who are life-long Peorians and others who are former Brethren, Catholics, Episcopalians, Quakers, Methodists, Baptists and more.

Jesus Christ said, "By this shall al men know you are my disciples: that ye have love, one to another." This is certainly true of Peoria Church. We love each other, which means all sorts of things. Of course we worship and pray together, but we also laugh together, cry together, disagree with each other, help each other - all of it because we love each other.

If you are reading this blog, you are welcome to attend any of the Sesquicentennial Events scheduled for Sept. 10. Here is the schedule:

Thanks for your support and prayers for Peoria Church.
Posted by Brian Daniels at 3:12 PM 1 comment: 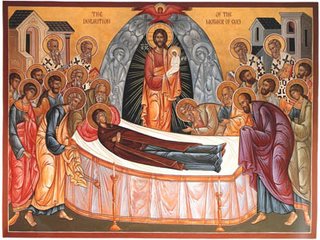 What would you do if you knew a person who was completely sold out to God, who staked her reputation and her life on her faith, who followed Jesus Christ diligently, whose heart broke at the Crucifixion and rose to ecstatic elation at the Resurrection?

Such a woman is Mary of Nazareth, justifiably known as the 'first to accept Jesus Christ.' Mary is the woman who accepted the call to be 'Theotokos' or "God-bearer." She didn't do it with pride or with thoughts of self-advancement: To the Angel she said, "Behold the handmaid of the Lord; be it unto me according to Thy word."

When she witnessed the miraculous testimonies about her newborn Son, she "pondered all these things in her heart."

When she attended the wedding feast at Cana and witnessed Jesus Christ's first miracle, she said, "Whatsoever He says to you, do it."

Unlike eleven of the twelve Apostles, Mary stood with her Son until His death on the Cross.

Without the fear that kept the Eleven in the Upper Room on the Morning of Resurrection, Mary went to the Garden to tend her Son's Body, only to witness the glory of His Resurrection.

Yet for all this, the Virgin Mary remains under-rated, misunderstood, and in many circles, nearly ignored. Certainly we can echo the words of John the Baptist's mother Elizabeth who said, "Blessed are you among women and blessed is the fruit of your womb. And how is it that the mother of the Lord cometh to me?"

Mary is a woman we need to know better. As the Angel told her at the Annunciation, Mary is "blessed among women" because of her willingness to bear the Son of God. In her wonderful Magnificat, Mary sings, "my spirit hath rejoiced in God my Savior, for He hath regarded the lowliness of His handmaiden."

Tuesday, August 15, is the observance of the 'Dormition of the Theotokos.' It marks the 'falling asleep' of Mary and her entry into her eternal reward in Heaven. Mary's death is a foretelling of our own deaths. It reminds us that an eternal reward awaits us when we 'fall asleep' in the Faith.

On Tuesday, take a moment to thank God for the example Mary has provided to all of us as a woman of faith and find a way to follow her example.
Posted by Brian Daniels at 7:25 PM 1 comment: 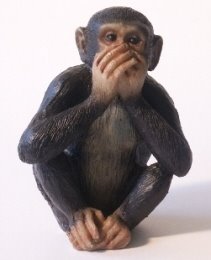 I was at Hardee's in North Manchester the other day, my usual haunt when I'm away from Timbercrest for a little bit. As I was enjoying my sandwich and the USA Today, an acquaintance of mine came in with a co-worker.

I saw him, but he didn't see me. That's important to remember.

I waved to him as he stood in line, but he didn't wave back. I kept at my paper.

His co-worker chose the table right next to mine. When my acquaintance sat down, his back was to me, and he still didn't see me.

As they ate, another group of men came from their workplace and sat next to them.

And therein lies the problem.

This acquaintance of mine is a very devout man. He is active in his Church in North Manchester, he is a member of the Gideons, and he teaches an adult Sunday School class. He was even wearing a Christian-themed T-shirt.

But to listen, you may never have known it. I know I shouldn't eavesdrop, but I simply couldn't avoid the expletives that came out of his mouth. At first, I thought it was just farm-talk. Many farmers I know use a shorter word for "manure" and don't blink an eye about it. But then came the other words - words I almost never think, let alone utter (or write in a blog!).

I had just finished my sandwich and was rising to get a refill of my iced tea when this man recognized me. His mouth shut as tight as Jack Benny's vault.

I don't write this to condemn my acquaintance. He is a good man, very likeable. It was amazing how much cleaner the conversation was after I got back to the table with my re-fill. :-)

I write this to say that I can relate to this man. How many times have I thought I was getting away with something, only to be witnessed unwittingly? When was I unkind to an innocent, only to be seen by a child from my congregation? When was I inappropriate (or how often) only to be forced to eat my own words.

There is an old-time expression that says, "Christ is the unseen guest at every table, the unseen listener to every conversation."

May I recall that next time I think no one else is looking!
Posted by Brian Daniels at 1:32 PM 1 comment: