The Warble of Spring 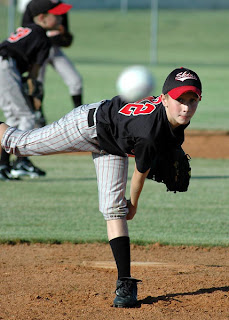 When I stepped out on the porch a week or two ago, I thought I heard it, a muffled warble coming from the old school a couple blocks from our house.

But it was late and I was too tired to investigate.

Rain created a few nights of quiet, but sure enough, Monday night I heard it again.

At times the tones were unified, like chanting monks going to vespers. This was early in the evening.

As the sun continued its slow set on the Spring horizon, the warble began to take a different cadence.

As I looked toward the old school I saw the sky brightening, even though the school is to the east of our house and the sun was clearly setting in the west. It was a bright, white light, a phenomenon we only see in Roann in the Spring and early Summer.

Yes, baseball has come back. I should have deduced it earlier when the traffic of boys on bicycles began to pick up, speeding past our house towards the school. But I've been too busy trying to pick up after this long dreary winter to notice things like this.

I put Buddy on the leash and we strolled down to the school. A game was going full bore. The parking around the school was jammed with mini-vans and older model sedans laden with car seats and fast food wrappers. Siblings younger than the ball players were out entertaining each other in games of tag and chase. Some were nibbling on sweets or popcorn from the concession stand. Parents sat on bleachers making sure their son got his chance to play (and his chance to play the same amount of time as all the other kids).

Too many kids and too many distractions kept Buddy and me from getting too close, so we decided we'd just take a longer walk around the big block (1.6 mi.). As we walked, I reflected on my own ignoble years playing baseball.

I only played for two seasons. I think they were the longest years of my father's life. I played for Travel-Mart, as did my younger brothers after me. I don't ever remember hitting the ball. Ever.

I was always placed in the outfield. I used to think I was put out there because my coach knew I had no talent for baseball. Now I think he was being understanding: he knew I'd much rather look at the sky or the grasshoppers or just about anything else besides the baseball game.

The only play I ever remember being involved with was one where I nearly cleared the bench.

The ball had been hit to my quiet corner of the field. This was odd, because most hits didn't make it past the baselines (once again demonstrating my coach's wisdom).

I snapped out of my usual day dream after I heard the coach (and practically everyone else) screaming and yelling that I was, indeed, the closest player to the ball. It had bounced and landed practically at my feet.

"This is interesting," I thought. It took me a moment to realize that I needed to pick it up and somehow get it to the catcher. So, with the energy of a champion, I picked up the ball and threw it with all my might.

It was a beautiful throw. I couldn't believe that such a beautiful throw had come from my arm. I was captured by the clear arc the ball made as it headed toward the infield. I was amazed at myself.

It would have been perfect if only it had gone towards the catcher. Instead, my beautiful throw went straight into the dugout. The raft of boys sitting on the bench inside ducked, fast. I remember hearing the ball make a crack as it hit the cinderblock wall at the far end of the dugout then a crashing sound as it ricocheted off the wire fencing that separated the infield from the players.

"I was such a wuss," I chuckled to myself as Buddy and I kept walking.

For years I thought less of myself because I was no athlete. It wasn't for a lack of trying. My baseball career ended mercifully when we moved to the country for a year and I had no way to get to a ball park. For three years in junior high, I was on the fourth string of the football team. I hated every minute of it, but Mom said it would be good for me. I still don't believe her. I ran track in junior high also, which I really enjoyed. But even though I was fast, I was almost entirely non-competitive, so by tenth grade, I was cut and I haven't had to play anything since.

As an adult, I've enjoyed sports for their real value. I've run and jogged off and on over the years, not to win races but just because it's fun. I've been on a couple bowling teams, again more for friends and to win. And, believe it or not, I really enjoy lifting weights . . . not to get 'buff' or anything, but to relieve all the stress that I hold in from everyone but God. And Buddy.

Too soon the warble of Spring will be gone again and the ball diamond at the school will be still again until next year. I'll try to listen better for that familiar call once more: "Heeeeeeyyyyy b-tttrrrrrr! Heeeeeyyyyyy b-ttttrrrrrr! He-cant-hit! He-cant-hit!"
Posted by Brian Daniels at 1:00 PM 2 comments: