Why City People Make Me Smile 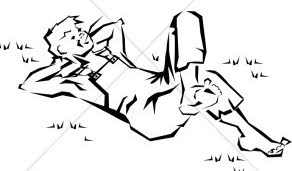 A few weeks ago, Karen and I had the chance to visit our daughter in Colorado Springs. In case you haven't heard, besides Pike's Peak and the Air Force Academy, Colorado Springs is a pretty good size town - half a million people, by some counts.

We did lots of shopping and walking and eating and napping while Allison was at work. When we were in town, we were afforded lots of time for "people watching."

City people are funny. They are truly a different breed than we who enjoy the good life.

Consider this simple example: a friendly wave. In our neck of the woods, folks wave all the time. You see someone across the road, you wave. You're driving down a county road and come up on another driver, you wave. You drive by someone out working in their yard, you wave.

Not in the city.

I tried waving at some strangers while we were driving from the Denver Airport to "the Springs" and you would have thought I was waving a pistol at them.

We were shopping in Old Colorado City, an historic area of "the Springs." While Karen browsed in some of the endless women-only stores, I waited on one of the Husband Benches on the sidewalk. As I sat, I watched the passers-by. When someone would catch my eye - man, woman, child, dog - I'd just give them a little wave, my way of saying, "Howdy, I'm a visitor here."

You would have thought I had flashed them. (Ironically, I think if I had flashed someone in the city, they wouldn't have noticed.)

City people make me smile because they like to be pretentious. Karen and I have become dowdy, middle-aged Hoosiers, happy with ourselves, and, in Indiana, acting and appearing like many of our peers. All the falderol city-folks create to get you to eat in their place, shop in their store, visit their museum, and give up (lots) of your dollars is amusing.

You can't just buy a pizza in the city. You have to get an olive oil crust, with all sorts of "fromaggio" and sun-baked vegetables you never heard of. And pizza meat, where you can get it, isn't just pepperoni or sausage. There's cotechino, linguisa, salsiccia, cervellatina, salami, calabresse - not one thing produced by Jimmy Dean or Bob Evans.

It seems to me that Tony's in the freezer at the grocery is about as good.

Another bit of pretentiousness that amuses me is the lengths city folks seem to go to in order to look rural, or rustic, or country. Out here in corn country, old barns look weather-worn because they are. Folk art isn't necessarily intentional: it's what we do when we can't get any reception on our TV aerials.

And we raise beans, corn, tomatoes, onions, beets, cabbage, peas, and lettuce in our gardens. Sometimes green peppers. The surplus goes in canning jars, on shelves, in the basement.

In the city, they raise kholrabi and kale. They grow bok choi and purple carrots, endive and squash blossoms.

Karen told Allison that she grew up with organic foods and Allison seemed to be amazed. "My Mom put the kitchen scraps on the garden because we didn't have a disposal. She didn't know she was composting. Dad put manure from the barns on the garden long before they began bagging it and getting $5 for 20 lbs."

I get to the city once in a while here in Indiana. The contrast isn't quite as stark, but it's there.

Heaven forbid you should take your time to look at the beautiful buildings while you're driving on I-465 in Indianapolis. The city folks seem to be in such a hurry to get places.

It was in the city that I first encountered a "Pay Before You Pump" gas station. In Roann, the station doesn't even take credit cards - cash or check only. (Yes, a check. Remember those?)

Even Church in the city is different. Our neice, who goes to an Indianapolis "mega-Church" pointed it out to me.

On a visit to our Church, where she was singing a special, her young sons played and ran and got all sweaty in the Church basement with other kids from the Church who came. They colored with crayons, played with non-electric toys, and snuck cookies from the refreshment table, just like the other Church kids there.

At her Church, the kids and parents are given a number and ID's that stop just this side of facial recognition technology. If the kids are causing trouble or need help, the kid's number flashes on a screen in the 'auditorium' and the parent brings their corresponding ID number and is then shown to their child.

This last thing - about the kids - doesn't really make me smile. It makes me sad.

And it reminds me again about how much I enjoy being a parson in the country.
Posted by Brian Daniels at 5:42 PM No comments:

What to Do With Mary? 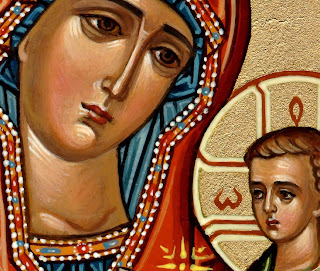 I don't know what to do with the Virgin Mary.

I know, a lot of people, especially my fellow Protestant Christians, consider Mary a non-issue. Why think about Mary when we already have Jesus? And, in a way, they are correct. We have direct access to faith, love, prayer, and the throne of grace through Jesus Christ.

That really isn't the point.

The Virgin Mary is unique in human history, the woman chosen - and who humbly accepted - to carry God the Son in her womb. The Bible teaches that she is to be revered and that she is "blessed" among women. The Third Ecumenical Council (431) signified Mary's importance by affirming that she the "Theotokos" - the Bearer of God, or, more personally, the Mother of God. [This is not a title of elevation of Mary, but a statement of fact: the eternal Son of God is truly, fully divine and has no 'beginning', but the fact that He came to earth in the flesh indicates that He truly has a human mother, hence the title Mother of God.]

I don't have an issue with that. But some do, Catholics, Orthodox, and Protestants.

Protestants throw the baby out with the bath-water. They tend to avoid Mary except when they buy the religious stamps for Christmas cards from the Post Office. Very little is ever said of her outside the context of the Christmas story. (It should be noted that this skittishness about her is a late development among Protestants. Martin Luther and other Lutheran reformers and the Wesleys and other Anglican reformers were comfortable with Mary as Theotokos and didn't shy away from her at all.)

The Catholic issues go to the other extreme, and some even go so far as to refer to Mary as a "co-redemptrix" with Jesus Christ: her suffering was akin to that of Christ. The Church of Rome has added all sorts of titles and honorifics, doctrines and adulation to the humble Nazarene maiden.

The Orthodox seem the most balanced to me, but even they sometimes seem to go beyond the Biblical parameters to honor, bless, and commemorate Mary at times.

So I'm still perplexed. What do I do with Mary?

This is important to me because Mary is far too integrated into the Gospel story to be ignored. The Nativity accounts are just the beginning. Those years between the return to Nazareth (from Egypt) and finding Jesus in the Temple, Mary was the most important human in His life. She nursed Him, changed Him, dressed Him, kissed His 'owies', fed His friends, and made sure He had a normal human childhood.

She truly was the God-bearer, in her womb and in her arms.

After the Temple event, when He was twelve, Mary helped Her Son make it through adolescence. After His Bar Mitzvah, when Jesus would have been apprentice to his step-father Joseph (or another relative in the carpentry trade), Mary would have kept His supper warm until He got home, made sure He had breakfast, kept His clothes clean.

The whole while, Mary would have been "pondering these things in her heart," as St. Luke so poetically puts it.

Mary is one of the most visible women in the New Testament, and she appears a number of times in Jesus Christ's ministry years. Because of this, she comes across the pages of my own life - if I intend to live a life centered in the Gospels.

But how far across my life should she go? The Dormition Fast has just recently ended and the end of the octave (of the Dormition) was Sunday, so Mary has been on my mind a lot recently. I want to give her all the honor she's due. I want to follow her example as the first person to accept Jesus Christ.

But my Protestant mindset gets in the way. I know "Mother of God" is theologically correct, but it has a hard time coming off my tongue. I know that she's alive in Heaven (as are all who fall asleep in the Lord) and because of that she is with the Heavenly Host praying for our lost world, but I have a very hard time asking her to pray for me, personally.

The Orthodox Prayer goes like this: Rejoice, O Virgin Theotokos, Mary, the Lord is with thee. Blessed art thou among women and blessed is the fruit of thy womb, for thou hast borne the Savior of the world.

I don't have any problem with this prayer at all (it's all Bible - see Luke 1), except for the part that involves actually 'saying' it.

And none of them bore God the Son as His mother. The cumulative accomplishments of these women pale beside the acheivement of faith that Mary had.

It's a pickle. What do you do with Mary? What should I do?
Posted by Brian Daniels at 3:47 PM No comments: