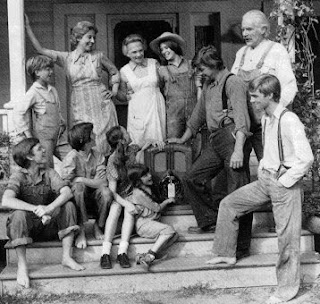 Spring is here and along with croci, tulips, and winter wheat, neighbors can be seen popping out for folks to see.

You begin to see neighbors about the same time as you begin to see robins. Of course, some people think that robins don't really leave for the winter. Same thing could be said for neighbors. You get a glimpse of them once in a while during the winter - scraping cars, hurrying into the house after work, passing each other when you pick up the mail at the post office - but like robins, you have to wonder where they really go.

I was out working in the lawn when I had my first real 'neighboring' of the season. Earlier this year I bought a machete - yes, a real machete - to cut down the dead remains of flowers and plants from last fall.

I thought it would be good exercise.

Anyhow, I was out hacking away at our monstrosity of a pampas grass growing in the front yard. As I was 'exercising' the neighbor across the street came over with his electric hedge trimmer in hand.

"This'll take care of that in a couple passes," he said confidently.

Our neighbor is not much older than me, but he always makes me feel like a nincompoop. But that's his game. He means well. He's gotten to know me in the 12 years we've lived here and he's seen me work with tools. I can just imagine the conversation he had with his wife as they looked out the window at me and my machete, probably distilled to one word: "Sheesh."

But he was neighborly enough.
He has a new job.
(He gets a new job every Spring.)
His wife has recovered from her surgeries.
(I pretended that I remembered what she had surgery on.)
His daughter-in-law was bringing over her vacuum cleaner for repairs.
(I've seen her in action: probably can't find the 'On' switch.)

And I think I was neighborly, too.
Karen's Mom isn't doing well so we've been gone a lot.
(He noticed we weren't home much.)
We're taking down the three pine trees that have died over the winter.
(He was interested in the wood.)
I just can't get used to this Daylight Saving Time.
(He doesn't know anyone who likes it - nor do I.)

Other neighbors have been out and about, too. Kids are running around everywhere. Bikes have popped out of nowhere and balls and bats and scooters and skates and all manner of outdoor toy have re-appeared.

Everyone's sprucing up around their houses. And as neighbor meets neighbor again, the chats begin and the lives rekindle that make our little town a community once more.

It is my observation that neighboring like this has become the province of rural towns. We have no neighborhood associations to make us nervous about the people who live next to us. Sure, we have a neighbor who works on his cars in his driveway, but hey, it's his house, and he and I talk about things neither one of us would discuss otherwise: I keep him up on religion, he keeps me up on the junk car business.

Bigger cities and towns have 'neighborhoods', but they seem to be contrived. Houses all made too look the same, trying to create the image of neighborlyness that really only exists in the small rural town. One man I know from suburban Milwaukee said about our small town: "This is the kind of place we try to get our suburb to look like."

Being neighbors isn't the same as being friends, at the same time we are friendly with one another. We don't share a common life, as friends do, yet we share a common community which draws our lives together in a unique bond.

I think this is seen most clearly in the volunteer fire department. Three of our close neighbors belong to the fire department. A few days ago, there was a significant fire at the anhydrous plant a few miles from town. In a flash these three were in their trucks, blue lights flashing, ready to take care of a problem they hadn't created, risking their lives for someone they likely didn't know.

It was comforting to know that these same three men, and many like them, would have been at our front door in an instant, were there a fire at our house.

It's what neighbors do.
Posted by Brian Daniels at 8:06 PM No comments:

The image above is from the internet, by cartoonist Gary Varvel, originally published in the Indianapolis Star, 2004.

One of President Obama's first initiatives was to release funding that will allow the machinery of the abortion industry to fire up again. Our tax dollars will once again be used to extinguish the lives of unborn children here and around the world.

May God have mercy on him.

Now the president will be signing into law funding that will destroy the lives of the unborn in order to allow the mad scientists of our country to experiment on them.

These same scientists who developed the means for embryos to be created outside the natural process of a mother and father are now cackling their ways back into the laboratory with a fat check from the federal government . . . to further mutilate the natural process by destroying the very lives they have developed.

Where is Mary Shelley when we need her?

Some believe the benefits of taking the lives of these embryos is justified in the results that will be obtained. Some diseases that tragically affect men, women and children, might be cured by research on these embryos. People with Parkinson's disease may be cured. Diabetics may find help.

So the death of one justifies the life of another? I believe those who are merchandising human organs have the same philosophy.

The same president who rode the wave of unpopularity of the Iraq War into the White House now deems the in utero violence of abortion and stem cell research as justifiable.

Those who believe that this evil is acceptable have a fundamental misunderstanding of human life. They have accepted the premise that human life is no more valuable than that of any other creature on earth. It is expendable in the cause of science.

Human life is so much more than only what our physical body involves. The life created at the conception of sperm and egg is much more than a biological reaction of substances. It is also the beginning of all that makes us human: our capacity to love and be loved; our ability to care and demonstrate compassion for others; our understanding of right and wrong; our likeness in the image of our Creator.

Clearly stem cell destruction and abortion are moral decisions. No amount of legislation will ultimately protect the lives of the unborn. They are dependent on the moral leadership of our president, our Congress, and the scientific community.

And they are being failed.

They are being failed by Barack Obama. Mr. President, you must repent.

They are being failed by Harry Reid, Senate majority leader. Mr. Reid, you must repent.

They are being failed by Nancy Pelosi, Speaker of the House. Mrs. Pelosi, you must repent.

It is no surprise that the president, a political liberal, would be affiliated with one of the most liberal denominations in the country, the United Church of Christ (UCC). The UCC has supported the murder of unborn children by abortion since before it was legal in the United States.

However, both Reid (a Mormon) and Pelosi (a Roman Catholic) are in defiance of their Churches through their endorsement of this pre-natal barbarism. Their defiance of the moral and spiritual directors of their lives smacks of arrogance, pride, and sin.

There are other sins that impact our national conscience: war, economic disparity, discrimination, racism, spousal abuse, alcoholism, child abuse, etc. However, none of these is so calloused as to inflict harm on a human life before it has drawn its first breath. None of these vices is so cynical as to create life in order to destroy it.

I am just a pastor of a small country Church. I love the Lord, my family, the Church. I do not know why I am called to make such bold statements to our president and the government. I just know that I am called to do so.

Please pray with me:
Almighty God, You have placed Barack Obama in the position of President of our nation; we honor him in that office, in the same manner that St. Peter admonished the Church to honor the king in the days of the Caesars. We pray for the president, that he would look to You, the King of Kings, for guidance, direction, and virtue. As he loves his own children, give him love for unborn children. May he have tenderness of heart for those awaiting birth; may he have mercy on them in the decisions he makes; may he seek ways to protect them, as a mother protects her own children. We pray for Mr. Obama's repentance, as we confess our own need for salvation and repentance through Your Divine Son, Jesus Christ, in Whose Name we pray. Amen.
Posted by Brian Daniels at 7:38 PM 3 comments: